Miabelle Comes Out on Top of HLH

Miabelle Gillier was diagnosed with hemophagocytic lymphohistiocytosis (HLH) the day before her first birthday in February 2011. Her family traveled to Cincinnati Children's from their home in New Jersey for treatment. After more than a year battling the immunodeficiency disease, Miabelle is happy to have said goodbye to fighting for her life and hello to learning her shapes and colors. 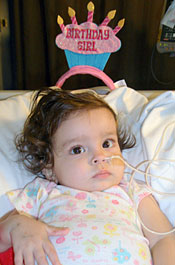 Miabelle Gillier is a happy 3-year-old with a head full of dark curls and an infectious smile. She's a thumb-sucker, a ballerina, a preschooler, a twin. She's also an HLH survivor. You can't tell it from looking at her now, but nearly two years ago Miabelle was struggling just to stay alive.

Miabelle was diagnosed with HLH on Feb. 18, 2011, the day before she and her twin sister, Noelie, were going to turn 1. The full name of this immunodeficiency disease is a mouthful: hemophagocytic lymphohistiocytosis. It's a life-threatening illness where the immune system malfunctions and attacks the body leaving it unable to fight infection.

It is estimated that HLH occurs in approximately one in 1 million children. It mainly affects young children, but is increasingly being diagnosed in older children and adults. Studies are under way now that could show it's not as rare as originally determined. The disease is devastating, ruthlessly damaging the body's tissues and organs. Early diagnosis and treatment are critical so the immune system's havoc can be stopped, preventing further damage to the body.

Miabelle first got sick when she was 11 months old. High fevers, constant crying, diarrhea, and extreme lethargy sent her parents, Olivier and Vanessa, to the hospital with her. It would take visits to three different hospitals before the Gilliers got a definitive diagnosis. Doctors initially thought Miabelle had a viral infection. That's the thing with HLH: Its symptoms are varied and many, and often mimic common infections. If a doctor doesn't know what to look for, it can be − and often is − misdiagnosed or undiagnosed.

Miabelle's condition became dire. The high fevers continued. Then she lost control of her eyes, indicating the illness had reached her central nervous system. It was then that Miabelle was diagnosed with HLH, a condition Vanessa and Olivier had never heard of before. Miabelle was scheduled to start treatment the next day, her first birthday. Instead of celebrating with cake and ice cream, she would spend the day in the hospital receiving chemotherapy.

Once the Gilliers heard the diagnosis, Olivier went to work to learn more. Originally from Belgium and as a businessman on Wall Street, he has many connections worldwide. He began networking immediately, reaching out to contacts from all over, many of them physicians. He wanted to know where his daughter would have the best chances for fighting this disease.

"Everyone said if it's HLH and you're in the U.S., go to Cincinnati Children's," Olivier recalls. "They have treated more HLH cases than any other place in the country, performed more BMTs (bone marrow transplants) and have the highest success rate for survival."

He and Vanessa did more research, and then booked a flight. They would make Cincinnati their temporary home for the next 18 months. Noelie stayed behind with grandparents.

Home Away From Home

Their first impression of Cincinnati Children's was encouraging. "Everyone we met with was so understanding and caring. You don't feel like you're a number here," Olivier says. "They made us feel like every child deserves all the attention a doctor can give. We were very pleased."

There are two forms of HLH − familial and acquired. Primary / familial HLH (also called FLH) is caused by an inherited problem of the immune system. Secondary HLH can be related to a variety of underlying conditions including infections, malignancy and autoimmune diseases. Genetic testing performed at Cincinnati Children's showed that Miabelle had familial HLH, meaning she would need a bone marrow transplant to completely replace her abnormal stem cells with healthy ones.

Looking for a Donor

The search for a stem cell donor began immediately. The Gilliers mobilized people in both Belgium and the United States, eventually spurring more than 13,000 people to sign up as possible donors. None was a match.

In the meantime, despite aggressive treatment including chemotherapy, Miabelle's health was declining. After a long five months of failing to find a single stem cell match, the Gilliers and Miabelle's doctor, Alexandra H. Filipovich, MD, decided they needed to act. They worked together on an alternate solution: for Miabelle's bone marrow transplant, they would use the stem cells from two different cord blood donors. These donors were not perfect matches, but it was the best they could hope for.

Olivier was impressed with Filipovich's development of this plan. "She looked at what we were faced with and determined the best way to approach it, even though our solutions were very limited," he says. "She was confident they could do this. We had a lot of faith in her."

And it worked. Very slowly, healthy stem cells started regenerating in Miabelle. A BMT weakens the immune system greatly, meaning Miabelle was very susceptible to infections. She lived in isolation for almost nine months. Finally, in March 2013, Miabelle got to go outside. Five months later, the family was given the OK to move back home to New Jersey. 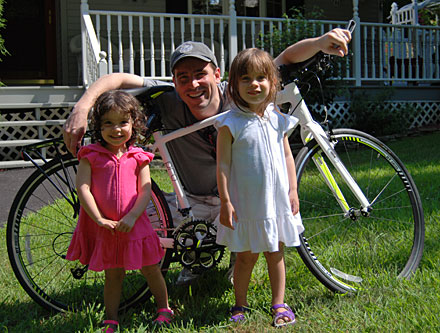 The Call to Help Others

Prior to this, HLH was foreign to the Gilliers. Now they want to increase awareness of the disease, with the aim of earlier diagnosis to give more children a chance at survival. In October 2013, Olivier rode in the HLH Ride for the Cure, a team bike ride organized by the Matthew and Andrew Akin Foundation. This cyclist team was made up of seven fathers, survivors, and supporters who rode 700 miles in seven days to support the HLH Center of Excellence at Cincinnati Children's. The ride ended at Cincinnati Children's and kicked off the medical center's fourth annual HLH conference, which educates healthcare professionals and families affected by HLH from all over the country.

"We are very appreciative of all the people in Cincinnati and those worldwide who contributed to advising us to go to Cincinnati Children's," Olivier says. "Now Vanessa and I feel it's part of our duty to help others get the best treatment."

Miabelle, now 3½, is happy to be home. She enjoys playing with her sister and, while a bit small for her age, she's on track developmentally. The Gilliers describe her as very compassionate and strong, traits they attribute to her experience at Cincinnati Children's. "The care we received from everyone − from nurses to doctors to the cleaning staff − they were all so supportive of what we were trying to do, which was save our child," Olivier says. "She's recovered so well from this. She's a lucky one."

When Hannah woke up with blood on her face, bruising and purple and red blotches all over her body, her mother knew something was wrong and took her to the ER immediately. A week later, Hannah was diagnosed with HLH.

Sean Feltoe was diagnosed with HLH as a teenager and received life-saving treatment at Cincinnati Children’s. Four years later, he embarked on a cross-continent road trip honoring his experience with HLH and raising awareness of the disease.